We have a new quiz for June from Julie Clarke (number 63) which has been loaded to the website as well as the answers to the May quiz. Our quiz page lists all the quizzes that have been set previously.

Thanks to those members who have already renewed for 2022/23.

Following the success of the renewal sessions held at the Rugby Club due to Covid, we have decided to repeat this opportunity to make the event a more sociable one.

Renewal ‘Drop-in’s will be held from 10:00 – 12:00 in the undercover seating area at Sandbach RUFC, Bradwall Road, CW11 1RA on Wednesdays – 13th and 27th July and 10th August. Light refreshments will be available to buy.

PLEASE NOTE: Our regular information desk in Sandbach Library will not be available on these dates

This event, last held in 2019 is making a popular return. This is your chance to talk to group leaders and committee members, and as the name suggests sign up to groups that are new to you, suggest new groups or if the group you are interested in is full – let your interest be known so that we can judge whether setting up a second, or even, third group would be viable. Not all groups will be represented but we will make a list available nearer the time.

PLEASE NOTE: Our regular information desk in Sandbach Library will not be available on this day.

Members of the Sandbach U3A Choir enjoyed a splendid evening of music at the beginning of June as guests of Crewe Male Choir in a joint concert in Sandbach Town hall. Both choirs gave polished performances of their own songs and combined to sing a couple of songs together in a remarkably proficient way considering that they had only had one rehearsal together. Without the bothering to rehearse, the hundred plus members of the audience made a pretty good job of Sweet Caroline and – of course, for the Jubilee weekend – Land of Hope and Glory. The choir’s four baritones surprised everyone by appearing with hair – well, wigs – for a rendition of an Elvis song which even the King would have been proud of.

The Choir would like to thank all the U3A members who came along to support the concert and for the backing of the Committee. Wouldn’t it be good to have a Gala Concert with all the U3A ‘performance groups’ taking part. Sadly, it will never happen – will it? 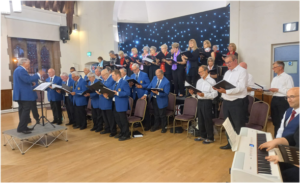 Those of you with long memories will recall that a quilt block made by Jinty Pike, the Leader of one of our patchwork groups, was judged and accepted as part of a quilt made to celebrate u3a’s 40th birthday. Her block used the idea of a juggler to represent all that is u3a.The quilt was unveiled at the Whitworth Gallery in Manchester last week and will eventually be on display at the Witney blanket museum.

Maureen Sawtell is pleased to have regained her muse and has submitted this poem:

If you have had your Covid jabs and passport is up to date
Then you are able to travel, so why hesitate
Why take time to dither and ponder
When you can jet off into the wide blue yonder

I’ve chosen my hotel carefully
All-inclusive close to the harbour and sea.
No mobility hazards, local bus stop close by
Even a special lounge to enjoy our afternoon tea.

Of course there are other bookings to make
Travel insurance, taxis and currency to take
A minder for Sophie cat and more.
Make these a travel experience not an arduous chore.

I’m a single traveller, expensive but I’m not deterred
As I’m usually very happy in my own space.
I try to wish folks a cheery good Morning
Hoping to put a surprised smile on a strangers face

Often guests tell me I’m brave travelling alone like that
But it’s a chance to break the ice, an opportunity to chat.
To others who might prefer to sun bathe and doze
I tell how I explore by local bus for a handful of euros.

There may well be Covid challenges ahead
I’m a few years older and need a stick to get around
But I’m a seasoned traveller with skills well honed.
The worst case scenario will be my trip being postponed!

1. Just ate a frozen apple. Hardcore.
2. Bought a litre of Tipp-Ex yesterday. Huge mistake.
3. I’ve started a business building yachts in my attic. Sails are going through the roof.
4. I stayed up all night to see where the sun went. Then it dawned on me.
5. I tried to catch some fog today but I mist.
6. I bought a dog from my local blacksmith. When I got it home it made a bolt for the door.
7. Last night I went to a comedy and philosophy convention. Laughed more than I thought.
8. Just watched a wildlife documentary on beavers. Best dam programme I’ve seen in a long time.
9. Just got a job playing triangle in a band. I stand at the back and ting.
10. I was trying to explain puns to my kleptomaniac friend today, but she kept taking things literally.
11. I stole a rabbit today. Then I had to make a run for it.
12. A woman told me she recognised me from the vegetarian club, but I’d never met herbivore