In the absence of our glorious leader (who was topping-up his life list on the sunny shores of the Black Sea), the first meeting of the new year for the Sandbach U3A Birdwatching group was led by a slightly anxious deputy.

Sixteen intrepid souls (including several new members), set off for Marbury Park under threatening skies but the weather improved once everyone had finally gathered at Witton Mill car park. We were greeted by the sight of a single Reed Bunting, and by the sounds of Robin and Wren. Following the recent dry spell, there was very little water in Ashton’s Flash but Swallows and House Martins were abroad and the cackling calls of Crow, Magpie and then a Jay allowed us to add them to the list. A lone Buzzard, perched on a fence post, presented himself for inspection (and for mobbing by the magpies), whilst a Chiff Chaff tried to persuade us that it was still spring.

Neumann’s Flash provided much more water and upwards of a hundred Lapwing with smaller numbers of Gulls (Black Headed and Lesser Black-back) together with Mallard, Gadwall, Teal and Shoveler. A pair of small waders, being harassed by the lapwings, were identified by two separate groups as Dunlin. (We decided our leader would be proud of us!). Further round the flash were Coot, Moorhen and the expected Canada Geese and Mute Swans. 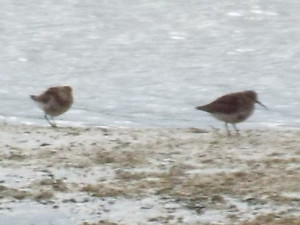 A recce group reported that Haydn’s Pool was almost dry and that no birds were in evidence, but on the walk back to the cars we saw or heard various tits (Blue, Great and Long Tail) together with Chaffinch, Goldfinch and Blackbird.

Lunch was taken at the Marbury Park Gazebo and then we moved on to the hide on Budworth Mere. The feeders were not in use but with eyes now attuned Tufted Duck, Shelduck and Little Grebe were seen on the water whilst three Cormorant were spotted on the far shore. By now a convocation of at least twenty Great Crested Grebes had gathered, as if from nowhere, in the middle of the lake. As we were preparing to leave, two Snipe were observed and duly added to the list. A pleasant , not overly arduous, day generated forty two species.