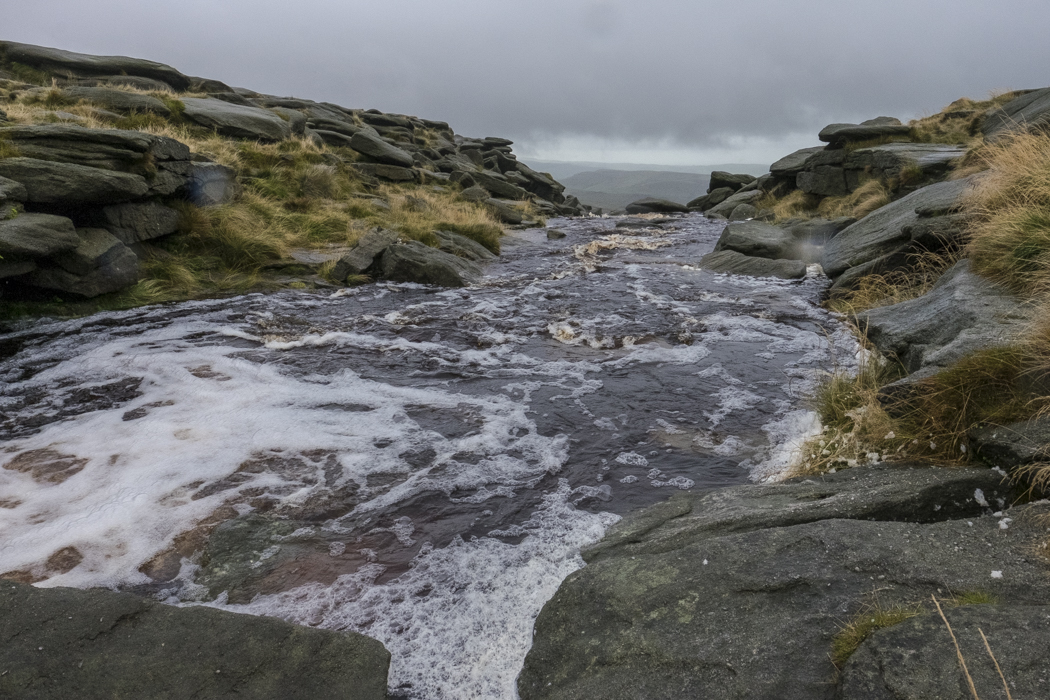 Before we had ventured very far, the path up William Clough had disappeared under a torrent of impassable water. When this happened the 2nd time, Ralph took the decision to climb up onto the moor and reach the path to the Downfall from on high – lots of bracken and tussocky, swampy grass to make it more pleasant. When the Downfall was reached, there was no way across to the other side. Eventually, a lonely soul who appeared on the other side and continued along the east bank, did reappear (he was foreign!) and so we ventured on towards Kinder Gates. Such path as there was continually disappeared – either into the ‘river’ or a peat bog. However, eventually we found a place just beyond Kinder Gates, where all managed to cross without incident. Then we had to return to the Downfall, but on this bank it was relatively straightforward and after a little over an hour and a quarter we reached the intended crossing point.

The compensation for all our tribulations was to see the Downfall at its magnificent best  and the rest of the route was largely uneventful – just a couple of minor hiccups.

It should be mentioned that the group bore the trials that were endured with their normal fortitude, humour and uncomplaining resilience!

For this walk you get two chances to see pictures of the action: one in the gallery below and the other on You Tube by clicking here.

The weather was the most prominent feature of this walk. We spent so much time walking in a mist that limited visibility to less that 100 yards that only the leader knew where we were. We left the old railway track that used to serve Rushton Spencer and headed up into the fine drizzle that was our constant companion for the morning. The hardy souls who scorned waterproof trousers, on the grounds that the rain would soon cease, were slowly and gently soaked. Those walkers familiar with the area on the far side of Bosley Cloud were aware that the Cloud was over there because we could here the sound of the guns at the shoot. The cloud that surrounded us meant that we were genuinely surprised to find ourselves halfway up the Cloud when we stopped for lunch.

Having made it halfway up, we pressed on to the summit and saw absolutely nothing. It was like we were alone in the world. We returned to civilisation via the long road down to the railway track and, although the rain mainly left us alone, the wet grass kept trousers hydrated and the mud gave us a treacherous surface to negotiate. Ian Clarke and Barrie Hacking both made a return to Long Walking and fortunately returned without damage.

There were almost no opportunities for fancy camera work but our resident pap took this shot of the walkers at lunch on Bosley Cloud when it is not actually raining. As always, the cheery spirit in the face of dismal weather is prominent in the faces of the walkers.

The journey to Langley for the start of the walk indicated that the mist of the previous week was still hanging around albeit at a reduced thickness. The clouds released a fair amount of their contents as rain and everyone donned waterproof trousers from the outset. Elaine took hero-worship to extremes and begged Ralph to let her wear his coat. (She deliberately left hers in Waitrose car park.) We took the Gristone Trail south out of Langley to avoid climbing up Teggs Nose and after a while Ralph promised that we could have a coffee stop at the Hanging Gate, where an open shelter with benches would be available. Ralph assured us that nobody would be at the pub because it has always been deserted on the recces. Sure enough we climbed up the hill to the shelter, shouted “Is anybody there?”, and settled down to refreshments. That’s when the man arrived with his bucket to clean the toilets. Fortunately Ralph displayed a hitherto hidden skill at diplomacy and we were granted leave to remain.

Ralph insisted on continuing the walk so, leaving a pair of walking poles behind, we set off to climb further up to visit Oakenclough and Piggford nature reserve, which had been established at a conference in Rio de Janeiro in 1992. We walked all round the reserve and the only animals we saw were several flights of geese trying to find their way in the fog and a solitary frog. This was a seriously dim creature because, with all the acres of Brazilian-sanctioned countryside to play in, it insisted on sitting on the path risking a flattened oblivion. It was at this point that we saw the mighty peak of Shutlingsloe. Most of us thought that seeing it was sufficient  reward but, as it disappeared in the murk, Ralph insisted that we should have lunch on the top. As we trudged towards the hill a conspiracy broke out, leading to what history will surely call “The Great Rebellion”. This mostly took the form of a sit-down protest by three of our number at the bottom of the hill as the rest of the party enjoyed lunch at the summit after the fog disappeared. Kath tried to stage a naked demonstration at the summit but we cut that short by threatening to confiscate her lunch.

We called at Forest Chapel before taking the path down through the increasingly treeless Macclesfield Forest to view the imposing bulk of Teggs Nose. Unwilling to risk another protest at excessive hill-climbs, Ralph allowed the party to take the downhill muddy section to the car park and kindly drove Kevin to the Hanging Gate to retrieve his poles.

The pictures this week include actual footage taken on the walk and images that we might have seen if a) the day had been sunny or b) snow had fallen recently. Enjoy them all.