The photograph below, taken by Davis Harrison and enhanced for diagnostic purposes is what we believed to be the White Wagtail. 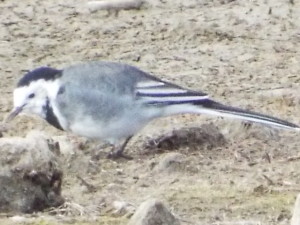 The first field trip of the season took us along the North Wales coast to RSPB Conwy, where the main group met up with the solo travellers to make 15 members. Winkling people out of the gift shop and on to the visitor centre proved a good move, as a female Sparrowhawk was on the ground in front of the viewing windows consuming that morning’s late breakfast. Not much else was visible due to encroaching vegetation with just one each of Little Egret and Heron to add to the list.

We moved on towards the Tal-y-Fan hide, and picked out a Chiffchaff among the tits and finches. The hide itself produced views of Wigeon, Teal and Snipe, before we picked out Pied Wagtails on the floor of the lagoons. A chance remark that there were likely to be White Wagtails among them sparked a discussion on the differences and identification feature of White Wagtails, with the consequence that we were able to add 2 White Wags to our tally. Moving from side to side of the Tal-y-Fan allowed us to add Little Grebe, Black-tailed Godwit, Dunlin and Redshank, while an examination of waterfowl on the far side of the reserve added Red-breasted Merganser to the count.

The Carneddau Hide produced views of Oystercatcher and Curlew, while two late Swallows headed south west. We rambled on around the Grey Heron trail through the pony grazing, reaching the Vardre viewpoint next. Here we saw Pochard with cousin Tufted on the lagoon, while a Stonechat perched on the fence alongside the screen. Next stop was the Foel Fras screen where packed lunches were consumed sitting on a stonewall in the sunshine.

The stroll along the estuary side produced a couple of Rock Pipits foraging on the rock banks, and then our last stop was the Benarth hide, where we could see Gadwall favouring one are of the lagoons. A juvenile Peregrine shot in front of the hide, causing mayhem, while a couple of Black-backed Gulls seemed disinclined to notice. We finished our two-mile walk with a Great Spotted Woodpecker on the approach road.

With time left in the afternoon, and sunshine to tempt us, we drove on to Caerhun church, looking for Hawfinches. Mid-afternoon is never a great time to find birds, but a Red Kite drifted by on the north side of the churchyard. A Great Crested Grebe dived on the river below the church, while a Canada Goose poked its head, briefly, out of a ditch. House Martins were on the move. Birds were being seen in the yew trees but they weren’t finches. Mistle Thrushes fed avidly on the yew berries, allowing us prolonged views. And so ended our first meeting of the 2015/16 programme, with a trip total of 52, or 53 if you include Pied Wagtail’s closely related White Wagtail.