Start from What 3 Words  ///with.dialects.parent Click here to see a map of the walk.

BMW Sat Nav directions take you via the buttock clenching Manifold Valley route, other makes of Sat Nav are available (and recommended).

We started with a little indecision and began the long gentle descent towards Hartington village where we had our lunch break that included ice creams for those of a certain persuasion. Then we had our first bit of work climbing out of the village and stopped to watch a farmer shearing some of his sheep and had an economics lesson based on the value of a fleece, approximately 70p, that costs £1 to cut according to the farmer’s wife. She said it is only done in their case, to improve the life of the sheep as the temperatures rise during summer. The weather until then had been reasonable until we dropped down to the Dove Valley and it began to rain. Waterproofs were deployed and the group moved on and were given an improvised geography/geology lesson by Stephen who explained how scree is formed in the steep sided river valley.

“Scree is a collection of broken rock fragments at the base of a cliff or other steep rocky mass that has accumulated through periodic rockfall. Landforms associated with these materials are often called talus deposits.”

I preferred Stephen’s description which was a distraction technique before we made the 100 metre climb out of the valley back to Alstonefield which left all of us struggling for breath. 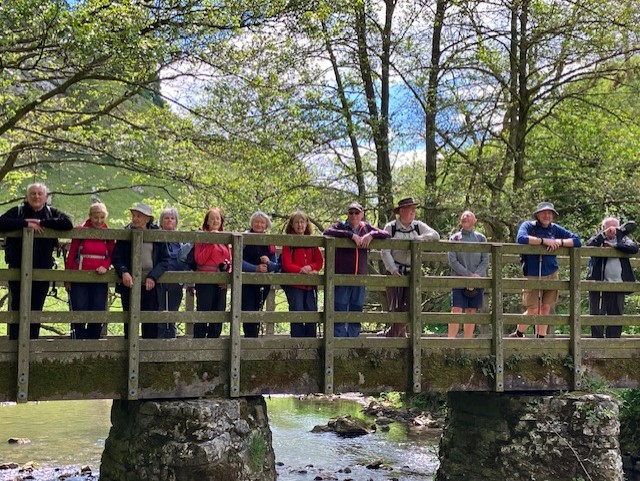 Start from What3words: ///topmost.lived.windmill Click here to see a map of the walk.

A varied and undulating 16km / 10 mile walk covering woodland, moorland, abandoned inclined railway track and canal towpath. There are a few small trees across the paths along the way but easily clambered over/under or around! There are around 10 stiles.

The 20 strong group was led, for the first time, by Wendy and the walk was challenging in parts, enjoyable always and fuelled by splendid Ginger or Date & Walnut Cake.

We dropped steeply into the densely wooded valley just to warm up our knees before the hurdling over the many fallen trees or limbo dancing under branches that defied our leaping capabilities on the uphill sections. It was relatively cool and humid in the valley and full of interest for the horticulturalists. What looked like giant rhubarb plants to the amateurs was in fact Gunnera manicata to the experts and a delightful small white flower called Eyebright. I heartily recommend it in liquid form to clean the itchy eyes caused by our lunch stop in a large open hay field full of pollen. Joy to the hay fever sufferers; praise be to the pharmaceutical companies who try to make it tolerable for us.

The temperature was steadily climbing as were the walkers, in an undulating or roller coaster fashion until we reached the Churnet valley. It was relatively plain sailing from then on and we enjoyed watching the Canada geese fledglings struggling through one of the locks on the canal. They were saved by the intrepid lock keeper meister Martin.

We made a short diversion under the railway line via a short tunnel that added a little drama to proceedings before following the line and waving to the engine driver and fireman as they travelled towards Frogmore, toot toot.

We were being lulled into thinking this was an easy walk until we had to go back up the hidden valley to the car park; a short sharp shock to the knees and lungs again. No pain no gain. All told a lovely walk.