Click here to see a map of the walk

Nobody recorded what happened on the walk but is was reputed to be muddy. (See the walk of 19 January.)The bridge picture supports this view. There is a surprising mismatch between the number reported on the walk and the number of warm bodies on the bridge. Did the photographer need lots of assistance? 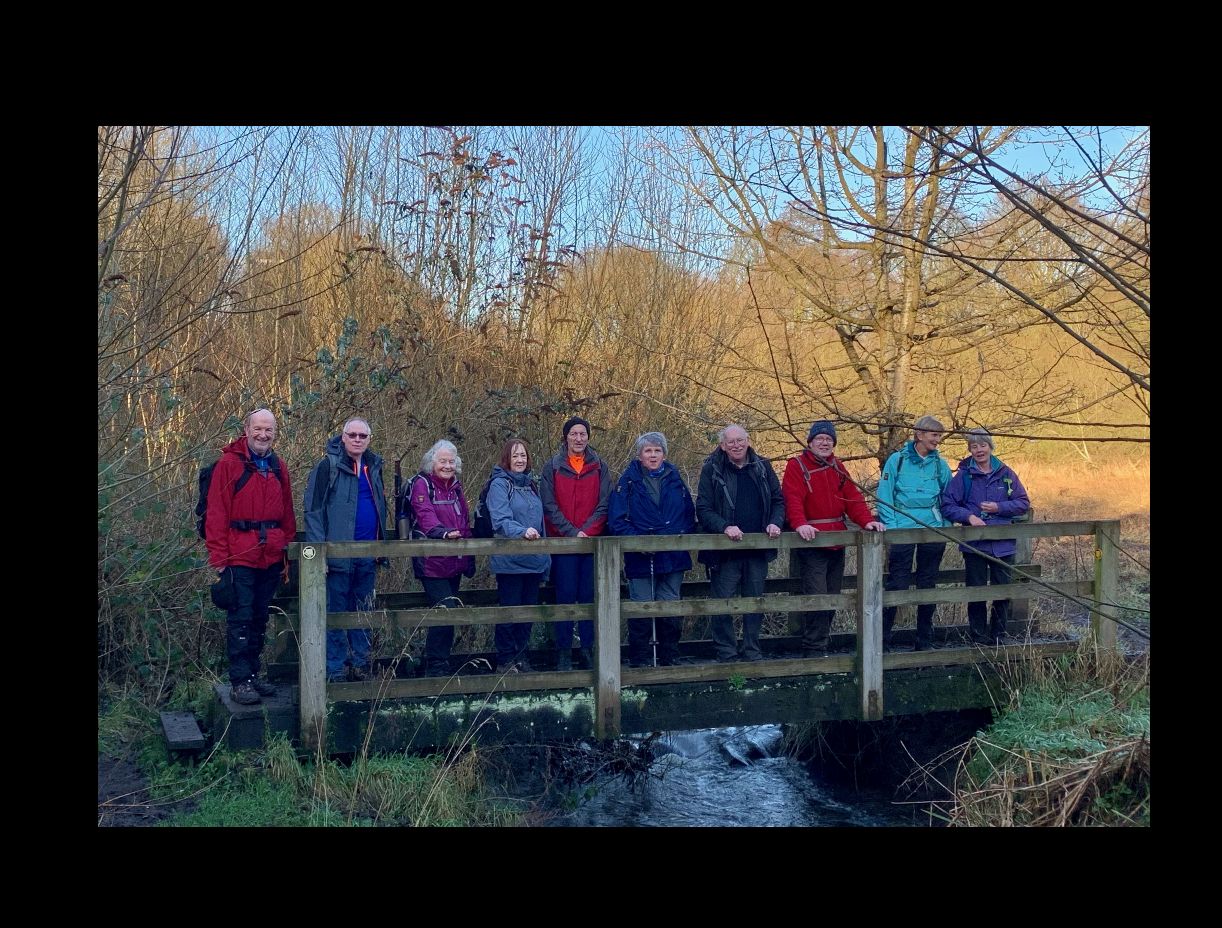 Click here to see a map of the walk

The leader sat in the heavy rain at Waitrose car park in case someone wanted a lift to Madeley. When the only car to join him was full of Badgers, he thought he might have to eat an awful lot of cake. In the event, the Madeley Centre is well known and easy to get to, so the walk was well populated. The rain also stopped before the walk started.

The first stage of the walk to the motorway went at a cracking pace and the walkers thoroughly deserved the cake they had at the coffee stop. They were accosted by a local farmer, who felt the need to chat. Farmers don’t get much conversation out of cows or sheep.

After walking to Keele, the group made a notable first by passing through the university. This was not to educate the walkers; it’s too late for that. The route south conveniently went through the Clock House near Keele Hall. In the first slip up of the day, the leader was unable to respond to the question “How much did it cost to build Keele Hall?”. More preparation is required next time

The Sneyd family owned the Keele estate, having made their fortune from coal, iron and brick making. Ralph Sneyd had the current hall built in the 19th century and the Clock House housed his horses and carriages. According to Janet, who has been in, the university vice-chancellor lives there now (not in a manger though).

The route went down a long tree-lined avenue south then up a long potholed track to the northwest. This was a shame because the route then went south again to Keele motorway services. In a triumphant move, the leader had chosen this as the lunch stop because of its picnic tables and warm toilets. It also has showers although the need for them became obvious only after lunch.

After lunch and the first indoor bridge picture, the group continued south to the first stile of the day opposite Racecourse Farm. This takes its name from the racecourse bult by Ralph Sneyd south of where the motorway now stands. Nothing remains for the casual observer to see.

What the walkers did see after crossing the stile was a muddy field and there was further soft going round Yewtree Farm. This was just the beginning of a mud-infested nightmare as the walkers climbed the hill to Woodhouse Farm. The field had been planted with mangold-wurzels, which the farmer had uprooted and left on the surface for his cattle to eat. To ensure that they concentrated on the task, he had confined them with electric fences and on the day of the walk they were occupying the path taken on the recce. Rather than barge through their feeding area, the leader decided to walk straight up the hill in the area devastated by their previous feeding, stamping and defecating. This would have worked reasonably well if the walkers had followed the leader over the heavily rutted but firm clay, but for some reason, most of the party took a route that led to a cloying quagmire. When the ground holds on to your boots, it can be difficult to stay upright and Linda and Elaine both went down collecting enough clay to make a statuette each. Linda asked for photographic evidence for the forthcoming court case but Elaine is still on the run from the police so declined. Dave manged to stay upright through the clay but fell when the electric fence shocked him.

The group agreed that this was the worst mud ever but that could be because memories have faded as well as the high number of fallers on this occasion.

After Woodhouse Farm the route followed potholed tracks, where walkers tried to wash off the clay, and tarmac roads to Whitmore Heath – an upmarket residential area, where clay-coated vagrants would not have been welcome.

The leader briefed the group on the possibility of confrontation on the track near Snapehall. On the recce a security guard tried to prevent the recce team from following the public footpath because there was work going on nearby. The team said they would take the risk and found no workers anywhere near the track. On the actual walk the security guard stayed firmly in his seat. Fortunately, he kept his dog inside the van as well.

From there to Madeley there was little to disturb the walkers except a dead buzzard that Dave found near the railway. All the walkers returned to the car park safely, but some carried visible marks of their ordeal to the delight of local children.