Our field trip to Somerset commenced in rain, which got heavier as we hit the motorway, and somewhere south of Birmingham became torrential, with a good deal of mist thrown in. We reached the Beechenhurst Visitor Centre (to use their facilities) in the Forest of Dean, and gathered on the verandah to watch the rain fall. Our first birdwatching stop was New Fancy, and here the main party encountered a Nanook-like figure, dripping rain rather than icicles, who had braved the drenching and reached the top of the viewpoint. A Green Woodpecker had been his reward.

Having gathered together some 90% of our expedition at New Fancy the decision was made to retire to the Postage Stamp Café in the village of Parkend, where we nearly swamped their tiny space, and where hot drinks and toasted tea cakes became the order of the day. We tried the yew trees near the cricket pitch for Hawfinch, but the rain seemed to have put them off feeding. We moved on to Cannop Ponds to eat our packed lunch, and here the rain eased at last, allowing us to finally get to grips with the bird life. Mandarin Duck was our target bird here, and we were soon viewing at least 3½ pairs. Song Thrush, Little Grebe and Nuthatch were all seen, before the pond-side trees gave up an early Willow Warbler, making the list before its expected congener Chiffchaff. A Goldcrest buzzed through the trees, and we saw a Grey Wagtail standing in the stream before boarding the convoy again.

We crossed the Severn at Chepstow and made our way to our hotel in North Petherton. Our baggage had barely touched the floor of our bedrooms before 11 of our 18 members returned to the cars and went Crane-hunting. The first car load had hardly got out of the car and headed for the boot for optics, before 4 Cranes were seen over Oath heading south-west! Unfortunately, the two car loads arriving later did not see our target birds, but did have their own successes, with a Kingfisher streaking underneath the bridge they were standing on for one group. The other group saw a Barn Owl and two Cranes South American Rheas! At the log call that evening, these two agricultural diversifications did not make the cut for the trip list. But we will return to them later.

The next morning dawned fine and clear, and we were soon on our way to the WWT’s reserve for the area, Steart Marshes, where we were greeted by the song of the Skylark. We soon came to the conclusion that this was the home of the Shelduck, which were present in numbers on Steart Marsh. Curlews were also there, and prolonged study revealed three Golden Plover roosting in a tussock island. We set out heading east from the car park and our ears were very soon assaulted by a burst of Cetti’s Warbler’s song. Then two very smart Wheatears were posing on fence posts at the Mendip hide, and we found a Stonechat on old weed stems. Overlooking the Parrett river we saw Grey Plover and Oystercatcher, while a Sparrowhawk on the hunt shot around a hedge line. The Quantock View hides gave us good views of three Great White Egrets. 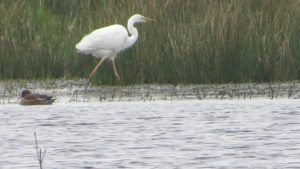 We found ourselves with time enough to visit Swell Wood, the RSPB’s heronry reserve. In a mini-amphitheatre of a hide we watched Herons sitting on nests, roosting in the treetops, and bringing in building materials to finish off the nests, in fact the complete social life of a Heron village.

The car park had feeders on most of the trees, bringing in good numbers of Tits, among which was a brief sighting of a Marsh Tit. Nuthatch and Long-tailed Tit filled out our day list.

Wednesday proved to be the highlight of the trip when Ham Wall was the morning destination. We were still in the car park when Cetti’s Warbler and Chiffchaff were heard and a couple of Meadow Pipits seen by the Mini Marshes. A Great White Egret cruised past, and Bullfinch and Great Spotted Woodpecker were identified as we set out. On the main track our progress was serenaded by Chiffchaffs, so numerous that there must have been an overnight arrival. Goldcrest, and another migrant, a male Blackcap were seen from the path. Just before the first viewpoint a Glossy Ibis was found, feeding alongside reed stubble. Excellent views of this scarcity were obtained with scopes, and images were made too. 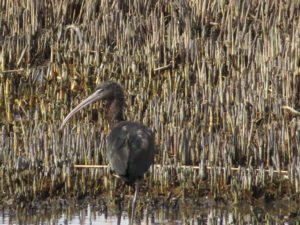 Squelching along the rubberised track to the Tor View Hide, we were soon getting to grips with Snipe, Water Rail and Great Crested Grebe. Still Cetti’s were exploding in the reed beds and we were treated to an influx of several hundred Sand Martins, both high and low over the reserve. A Sparrowhawk was noted and then we moved on out to the double-decker Avalon Hide, deep in the marshes. Here we encountered 4 Bitterns, perched out in the open on bending reed stems, and in flight, some at close range – easily the best views the group and many of its individual members had seen.

Up to 4 Marsh Harriers were observed, including a food pass between a male and a female.

A hovering Kestrel was a little bit of an anti-climax, as we made our way back to Ashcott Corner and our packed lunch.

Shapwick Heath was our next reserve, just across the road from Ham Wall. We spent a little while trying to time our walk along the South Drain to avoid the incoming heavy shower, but failed miserably, getting soaked on our way out to Shapwick’s new double-decker Tower Hide. Wrens, Cetti’s Warblers and Chiffchaffs serenaded us, and from the upper floor of the hide we saw Marsh Harrier, Great White and Little Egret, and heard Bittern booming (and one was seen in flight later). The rain eased, the sun broke through and we walked back to the cars with a Great Spotted Woodpecker providing the amusement, while one group found a Kingfisher.

After a little diversion we eventually found our first Thursday reserve, RSPB Greylake. While booting up, Chiffchaff was heard, and Reed Buntings were coming to the feeders. A Wheatear posed in the top of a willow tree as we set out into the reserve, and a Cetti’s volatile notes ambushed us along the track. A cloud of ducks were flushed several times from in front of the hides, mainly Wigeon and Shoveler. We later discovered the culprit was a Peregrine, which we found perched on a post out on the levels. Great White Egrets were present here too, and shorter-legged waders, Black-tailed Godwit, Curlew, Snipe and Redshank. Buzzards and Marsh Harriers were seen several times, but kept their distance.

We made a stop at the Avalon Marshes Centre to use the facilities and were able to watch their feeders, Pied Wagtail and Reed Bunting being prominent. Chiffchaff provided audio, and was seen feeding on catkins. On then to the Somerset Wildlife Trust reserve at Catcott Lows. Great White Egret was one of the first birds to come to our attention. The shallow floods still held significant numbers of wildfowl, Teal, Gadwall and Tufted among the Wigeon and Shoveler, while a single female Pintail emerged from the crowd a couple of times, but was elusive. A Peregrine surveyed the scene from a dead tree, and a Marsh Harrier cruised across the background.  We explored further, taking in the Catcott Heath tower hide overlooking the Great Fen. It was fascinating to watch quite large reed islands being blown across the open water, while Little Grebes dodged their progress. Aching legs bore us back to the cars and we set off back to the hotel for a convivial evening dinner.

We set off on Friday for the journey back to Cheshire, with our first stop being Cheddar Reservoir. Strong winds were keeping heads down, but a walk along the reservoir bowl brought us to an area sheltered by trees and shrubs, where we watched a Chiffchiff cavorting among the twigs. Long-tailed Tits and Bullfinch were found too. Out on the water a couple of Great Black-backed and a Herring Gull put in appearances, while a few Sand Martins overhead reminded us that spring migration had commenced.

Our final stop came at Slimbridge, where those who missed the Cranes were able to catch up with five seen on Tack Piece. A pair of lingering White-fronted Geese were nearby, and could be seen from the Holden Tower later. Our collective breath was taken away in the Tower as a huge female Goshawk sailed along the hedge line in front of the hide – another once-in-a-lifetime view. This bird was presumably from the Forest of Dean population, and looked to be hunting for an easy meal.

The Dumbles held a flock of around 200 Barnacle Geese and it took a couple of telescope sweeps before the single Brent Goose with them could be teased out. And the pool at the foot of the Holden Tower produced another, this time easier-to-see, female Pintail. A walk out to the South Lake Discovery hide added Black-tailed Godwit, Avocet and a male Garganey to our trip list.

Our non-birders visited Wells (cathedral-gazing), Street (apparently purchasing shoes was resisted by some), the Willows and Wetlands Centre (willow coffin-making observed and wicker chickens and dragonflies bought – so partly birding-related!), new age Glastonbury (where this offshoot group held out against the lure of the tattoo parlours) and Taunton.

The Somerset Levels provided much to interest us, birders or not. The avifauna is obviously different to our part of Cheshire, and it was interesting to see multiple Great White Egrets at almost every reserve, Bitterns heard and seen in good number, Cetti’s disturbing the peace in every reed bed and Marsh Harrier almost the commonest raptor. Special birds came our way in the form of Glossy Ibis and Goshawk, and migration was proved to have started in the shape of Willow Warbler, Blackcap and numerous Chiffchaffs and Sand Martins. Our trip list reached the total of 99,  not bad in a period when a lot of winter visitors had returned north, and migrants from the south had not yet flooded in. Which brings me back to the discarded Rheas.