Members of the Committee will be on hand to process your renewal, answer group membership enquiries and welcome new members. Refreshments are available from the Rugby Club.

It seems that some members’ email systems are replying to mailing@sandbach.u3a.org.uk which doesn’t actually go to the leader, even if their name seems to be attached to the email address!

If you are replying to a message from a Group Leader please check that you can see their personal email address in the To: line of the email

The end of our u3a financial year is August 31st. If you are currently collecting fees for your group can you make sure that they are all paid in by the end of August please.

Mick Jackson sent us this report:
On the 8th July 8 hardy warriors from the Sandbach u3a Walking Cricket Group ventured into hostile territory to meet the champions of Yorkshire; Barnsley U3A. It is fair to say that Barnsley did not play their best team but in the ensuing titanic battle, Sandbach emerged the victors.
After losing the toss we were put into bat and with contributions from all amassed 69 runs in the allotted 16 overs.
Given that Barnsley are the top Yorkshire team and had played many more matches than us, was this going to be enough?
Indeed it was, with some excellent bowling and fielding Barnsley were restricted to just 37 runs leaving us with a victory by 32 runs, quite an achievement for our first competitive match.
One hopes that this will inspire others to come and join us as Barnsley could pick from 55 registered players where as we were limited to the eight that travelled.
From left to right and in white the victors along with the Barnsley team and the two umpires.
Barrie, Val, Keith, Colin, Bernie, Ian, Mick, Rich. (Yes we do encourage ladies, Barnsley fielded three)
Barnsley will visit Sandbach as well as Wakefield so more action to come. 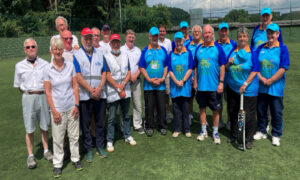 To celebrate the u3a 40th anniversary in 2022, u3a are launching a u3a-wide Anniversary Quilt competition on the theme of Positive Ageing.

Jinty Pyke has already created an individual entry and writes:
My inspiration was that there is so much on offer within U3A that it is difficult to always juggle one’s diary to fit it all in! So I linked that to the fact that Sandbach & District U3A have a successful Circus Skills group which members find is great fun. I have used machine applique and hand embroidery on my block. 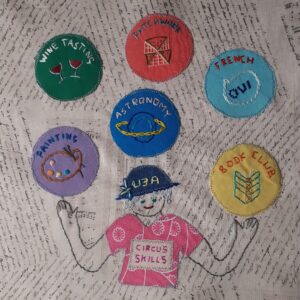 We are urging those living and working in Cheshire East to:

Sandbach Town Council invites representations on its Neighbourhood Development Plan (SNDP). This is a formal public consultation being run in accordance with Regulation 14 of The Neighbourhood Planning (General) Regulations 2012. The consultation commences on 21st. June,2021 and closes on 1st. August,2021. It covers the future for the whole Parish, Sandbach Town, Elworth, Wheelock, Sandbach Heath, Ettiley Heath.

To view the NDP and related documents – https://sandbach.gov.uk/sandbach-neighbourhood-development-plan-2021-review/

There is also to be a public consultation meeting in the Town Hall on Monday 26th July 2021 Time: 4.00pm to 8.00pm details – https://sandbach.gov.uk/sandbach-neighbourhood-development-plan-open-evening/

A Reminder to Be Alert About Phishing and Other Scams

The Third Age Trust wants to share with you information about the latest scams. Below are two experiences from u3a members who contacted us to share with other u3as.

For support, tips and advice please go to Barclays Digital Wings initiative.  You do not have to bank with Barclays – they have information on scams.  Follow the link below – sign up and when asked, your code is U3A (in capitals).

You can find them at this Barclays Digital Wings address.

On a Lighter Note

Courtesy of Wanstead and Woodford u3a