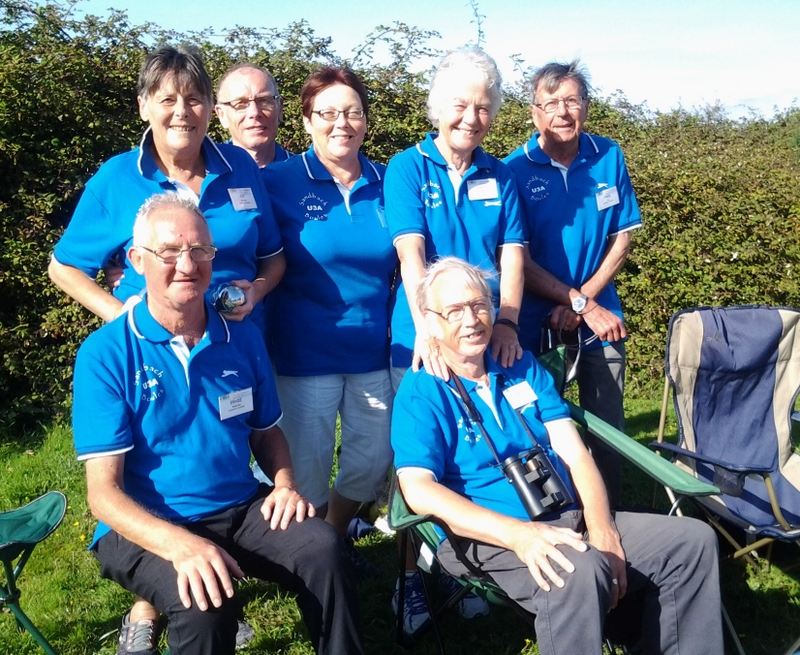 As last year, the pétanque group was again invited to join in a weekend in Hayling Island involving U3A pétanque groups nationwide. This year the fame of the competition had spread and there were even more teams involved – 52 in all. Eight people went from Sandbach comprising two teams of four  – Sandbach Saxons and Sandbach Crosses. Each game was played by three members of the team.

The weather dawned bright and sunny on the Saturday morning, and we all assembled for the league games at 09:00. Each team was to play 5 games in Saturday’s league.

Sandbach Saxons played their first game against Bills Wanderers from Guernsey who won 13 – 8. Bill reckoned that they won due to him drinking milk from a carton after each lost point. The carton had been left in the chalet by previous occupant!

The next game gave them their first win, playing Droitwich 4 and winning 13 – 6. Jenny ‘the boss’ had trouble getting the men to obey her instructions. The men were not very experienced players.

The Players, one of the many teams from Stanford -le -hope, won the next match 13 – 9. Perhaps Sandbach Saxons were just too helpful when they reorganised their boules so that they could loan a set to an opposing player who had lost his boules!

Sandbach Saxons final match on Saturday was against a team of 3 ladies , Richmond Ravers, who insisted on measuring even when it was obvious which was the winning boule. Sandbach Saxons lost 13 – 9.

Meanwhile, Sandbach Crosses were having mixed fortunes in their Saturday games.

Their first game was against one of the Stanford-le-Hope teams (they had entered 11 teams in total!) The Jacks had a very professional approach but it was quite a close game until at one end they scored 5, and Sandbach Crosses could not recover from that, losing 13-7.

Their next opponents were Richmond Rat Pack, a very pleasant team who won 13-8.

Torridge 1 then wiped the floor with Sandbach Crosses, winning 13-1, but in the nicest possible way – saying that Sandbach were the pleasantest team they had played!

The next game was against Phil’s Shooters from Guernsey, on their first trip to Hayling Island. At last Sandbach Crosses got a break and won this game 13-9.

Sunday morning took the format of 3 games in a league.

Sandbach Saxons first game was against Kings Hill, which they lost 13 – 9.

The next game against the Smiths from Stanford-le-Hope provided Sandbach Saxon’s lowest score of the competition  2 – 13.

The next opponents, B J Poplars, had very colourful logos on their t-shirts but it didn’t stop Sandbach winning13 – 11 in a close match.

Next up were the Richmond Rowdies, who insisted on their own rules! They won 13-3.

And lastly yet another Stanford-le-Hope team (9), who were a really lovely team. It was a very close game which they won 13-11.

Sandbach Saxons started with a game against Kemarjo, which they won 13-3. Kemarjo praised Sandbach’s play but were unhappy with their result.

Their last match, the semi finals, was against the local team from Hayling Island, unfortunately losing 3 – 13. Sandbach were very impressed with the accuracy  of one of the lady players in this team who went on to became runners up in the silver section.

Their next game was against Southampton Slingers, which they lost 13-6 on a technicality when the jack bounced out of the playing area by one inch, allowing the other team to claim a point for each boule they had not yet played (3) and taking the game!