The day dawned bright and blue-skied for our last meeting of 2016. We met as usual at 0830, and drove out to Meerbrook, where members had parked close to the Visitor Centre. There seemed to be a reluctance to get started, but the reason as to why was soon cleared up by a glance at the parking charges – £2-50 for two hours or £4-50 for all day! Sharp, non-calculator-equipped minds had worked out that if we hung on in the car park until 1000, and were going to be at the pub for lunch at 1200, then money could be saved!. So that’s what we did. Fortunately there are feeders just outside the Visitor Centre, and we were quickly racking up common finches, Gold, Green and Chaf-, and Tits, Blue, Great and Coal. And then we latched onto a scarcer Tit, whose sallies on to the feeders allowed us to pick out the pale panel on the wing of a Willow Tit.

We finally shovelled our coins into the pay-and-display meters, and set off for another nearby feeder area. A Great Spotted Woodpecker was seen foraging in the tops of trees, the first of three. We drifted on to an area which overlooked the reservoir, and started picking out wildfowl, small groups of Wigeon, and one of Tufted Duck, and several Great Crested Grebes. Small flocks of Canada Geese kept alighting on the water, one of which contained two Greylags. Cormorants were using a raft to dry their wings, and gulls were bathing. We took the opportunity to review the salient points of Black-headed and Common Gull identification, and both Herring and Lesser Black-backed were recognised. A pair of Ravens flew west and then east again.

Yet another feeding area claimed our attention and we added Reed Bunting and Nuthatch to our list. The trees were devoid of the smaller winter finches, so we moved on to the bridge to view the northern end of the reservoir. Teal were dabbling around the edges, and more Tufted were moored to floating vegetation for a well-earned snooze. Among them was an apparent female Tufted which showed definite differences in shape and plumage to its nominate relative. It had a domed head with a dark cap, and although its beak was tucked under its wing, a paler saddle could be seen between cap and bill. The plumage sides were paler than nearby Tufteds, and the bird had off-white under-tail coverts. Not an easy bird to identify, or to separate from its Aythya cousins, but the publication of very recent photos of this bird online helped us confirm it as a Ring-necked Duck, an American vagrant. All members took the chance to study this rarity through telescopes. We also noted a pair of Pochard, and three Goosander emerged from the far side thickets.

As we knew that the hides were fairly small our party of 16 split into two groups. Those that chose the west hide were able to study our North American visitor more closely. Those that headed for the east hide were able to add Kingfisher, Bullfinch and Long-tailed Tit to our 40-strong daylist. The Ring-necked Duck brought the group’s total for the calendar year to 143 species seen, and was the only scarce vagrant we saw during 2016. A more alert car-parking enforcement team may well have been able to add to funds as we drifted back to the cars a little late but all escaped unscathed to the Lazy Trout in Meerbrook, where we partook of our Christmas lunch. The buzz of conversation from all three tables (there were 22 of us) just confirmed the group’s strong social side. 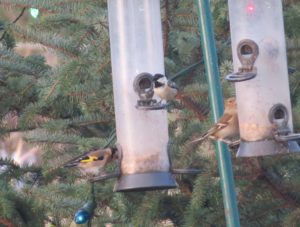