Despite Keith’s assertion that there were no hills on the walk, we marched up one to leave the valley of the River Dee, which was to be our frequent companion on the walk. Our starting place was the car park by Farndon Bridge, which provides toilets. Farndon Bridge crosses the River Dee and the England-Wales border to the village of Holt. It is a Grade I listed building and a scheduled monument.

The bridge was built in 1339 by monks from St Werburgh’s Abbey Chester with ten arches but two of the arches on the Welsh side have been lost (silted up?). The bridge is a narrow structure built of red sandstone which was restored and renovated in the early 1990s but it looks its age. Fortunately we didn’t have to cross it and, in fact, we never set foot in Wales although it was never far away.

After leaving Farndon we headed north towards Churton and on the way passed the obelisk commemorating Major Roger Barnston. Roger served in the Crimean War and then in India where he died, aged 31, in 1857 from wounds sustained at the Siege of Lucknow. His tenants and friends spent £400 erecting the monument.

We waited until we reached Grange Farm to have our coffee stop but didn’t stop too long because of the cold wind. We then followed the Marches Way to Aldford. Stephen pointed out that the Marches Way extends from Chester to Cardiff and it is 218 miles long. We should be careful not to fall for a long walk on that scale if Stephen (or Keith) suggests it.

Aldford is a pretty place mainly because the 2nd Marquess of Westminster rebuilt it in the mid-19th century as a designed village. The buildings are all painted in the same livery and have the same style of name plate. Some common houses have only numbers but they are still in the same style. The church tower was clad in scaffolding as we passed it to examine the earthwork remains of the motte and bailey castle which used to guard the ford across the River Dee (Aldford = Old Ford). The ford has now disappeared and a cast iron bridge with a span of 50 metres was completed in 1824. Naturally we stood on it while Ralph captured the scene. Had we continued over the bridge we could have glimpsed the grandeur of Eaton Hall but Keith was having none of that aristocratic nonsense and sent us off south to follow the path along the River Dee.

We eventually found a site for lunch where fallen trees provided the seating and shortly after we sat down the rain started. Martyn had up to that point been concentrating on avoiding the collapse of the rotten birch tree he had chosen for his place but now had to don his poncho at the same time. It was a pity that the group had scattered in a the wood because the performance was quite entertaining to those nearby.

The rain didn’t last long and we continued to follow the path and reached what Keith described as “World of Sheds”. The otherwise pleasant banks of the river were littered with shacks in various conditions of unpleasantness. The ramshackle jetties built of scaffolding poles and scrap wood showed the attraction of the location for boat owners but, on a cold overcast day the attractions of having a place in the country were not apparent. What happened to the Town and Country Planning Act 1947?

As we approached Farndon Bridge we should have had a lecture from Stephen but he had carelessly arranged another appointment to follow the walk and had shot off earlier. We studied the sedimentary layers of the Dee cliffs remembering all the earlier lectures.

You can tell by the blue skies that the first four pictures were taken before the walk. Actually they are from Wikipedia, so we need to acknowledge who took them.

The list below shows the person responsible for the pictures:

Before we left the car park Bill showed a warning picture taken after he plunged into a deep hole on the recce. We looked for the offending hole but none of the walkers repeated Bill’s experience. 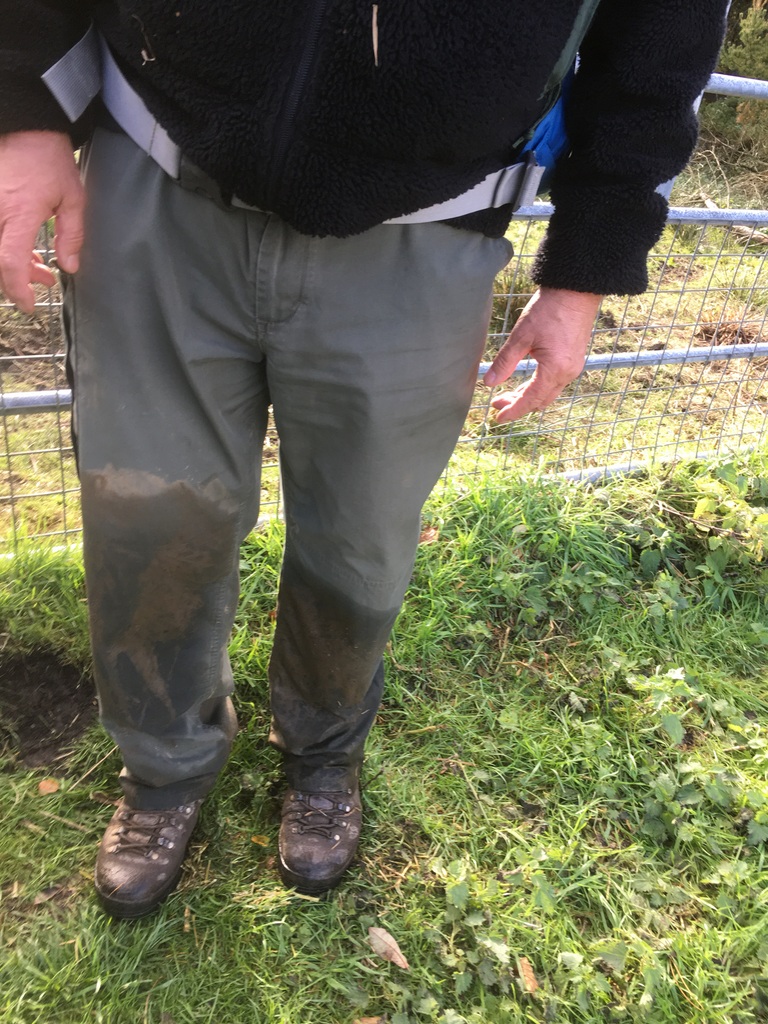 A windy overcast day with a forecast of rain to come saw 16 walkers set off for the car park next to the Lamaload reservoir. This is a major source of water for the residents of Macclesfield but the water level is far below the maximum. The rain we endured will help to fill it from the River Dean but there will need to be much more rain before it has a comfortable level to cope with another drought like that of 2018. The dam was built between 1958 and 1964 and is the highest in England at 1000 feet above sea level.

As if this wasn’t high enough we soon started to climb the surrounding hills in the direction of Bollington. The walk continued as a succession of climbing up and down hills in an area where there are few features to comment on. The coffee stop was called where a single bench and some rocks provided perching spots and while we were relaxed there a kestrel flew below and landed on a pole. At this point another group of walkers arrived and were asked to confirm the bird’s id. They were travelling light and were trying to get to the pub as quickly as possible. One lady admitted to finding a dead kestrel in her garden but couldn’t identify a live one. They walked with us for a while and we also collected a couple with a dog who followed our group thinking we were the “Wednesday Walkers of Bollington”. We pointed them in the general direction of Bollington and left them to it.

It is to be hoped that they all made it to their destinations because the weather soon turned unpleasant with strong winds bringing frequent showers. Fortunately the rain wasn’t too heavy but, combined with the strong wind, it made climbing hills a dismal slog. Going down hills was no better when the surface was smooth cobbles or slippery mud.

There was much relief when we reached Jenkin Chapel, the site of our late lunch. The joy of being on dry seats out of the wind can be seen on the faces of the walkers captured on Ralph’s shot taken from the pulpit. Eventually we had to leave our shelter and head south past Saltersford Hall and Redmoor to the car park. Barrie kindly took new girl Shahnaz on a shorter route to make sure she reached the car before darkness arrived. Ian found out about the short cut and added his aching knees to the party.

The final leg was in the teeth of a gale which proved quite useful to those not wearing waterproof trousers. While the rain held off, the wind removed the water quite nicely.