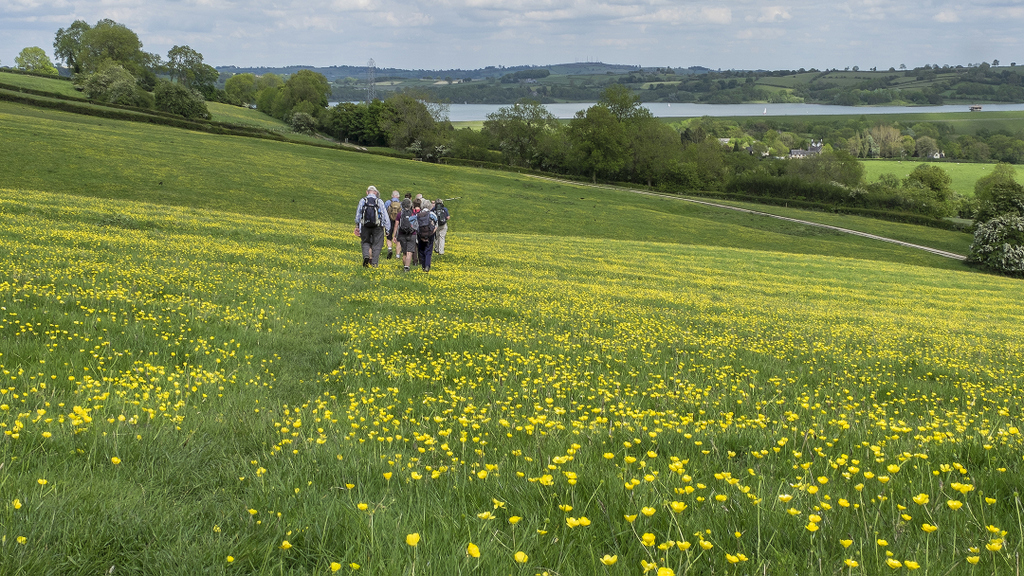 After a very pleasant journey through idyllic countryside, the party arrived at the visitor centre alongside Carsington Water, close to Ashbourne.

After a brief sojourn along the edge of the lake, a coffee stop was undertaken in Carsington Village – close to the pub (shut) but adjacent to a mini adventure playground of which full use was made by some members of the group (see pictures).

Passing the remains of a few old mines we walked through Brassington and admired the community spirit that had enabled the erection, in the Pub Car Park, of the smallest shop, possibly, in the land.

More delightful walking took us close to the hamlet of Ballidon, with it’s currently deserted beautiful, but dusty, Church. This provided us with an excellent site for lunch before more very pleasant strolling to the next village of Bradbourne – with its very impressive hall and Church. This latter had, like somewhere else we could think of, a rare example of a Saxon Cross in the Churchyard – which also contained the graves of the actor Alan Bates, his wife and son.

Moving on, we visited Bradbourne Mill which is thought to be the oldest surviving in the county, before crossing Wigber Low to the village of Hognaston – a place to live if you want to escape such trappings of modern life as mobile phones, etc., as the creation of Carsington Water removed any hope of digital reception – certainly in the lower half of the village. The Village Hall was constructed of stones rescued from property buried under the waters of the Dam.

The final leg of the walk took us around part of the western shore, via the Sailing Club, with the sun still shining on the many visitors enjoying a holiday like experience.

The drive to the start took us into a cloud and the start of the rain which accompanied us for most of the day. Not heavy rain; most of the time we could not see the raindrops hitting the puddles but we absorbed a lot of fine droplets nevertheless. Keith Haines tried to hide in a car to avoid the walk but he set off the alarm and was forced to join us. Mike Beck was proudly showing off his new equipment – a hydration bladder that fits in his backpack with a drinking tube that hangs next to his mouth for easy access. Doreen bought it for his birthday and he filled it for its first outing. He complained about the weight but that would get easier…

The fact that Shining Tor is the highest point in Cheshire was wasted on us. It doesn’t look like a peak and we couldn’t see anything else because of the murk. The welcome downward trek to Errwoood Hall (remains of) brought us lunch, which coincided with a break in the rain but, as we set off for the rest of the walk, so did the rain.

The watery theme continued as we walked alongside Errwood and Fernilee reservoirs in the rain. For Mike life was even wetter as his hydration bladder malfunctioned by delivering water through his backpack onto his back and down his trousers. Every step sent another spurt down his back and reduced Doreen to a tittering wreck. She insisted that Mike walk behind her so that she could compose herself. It was no wonder that Mike complained about the weight when he set off. It kept leaking for ages.

In spite of the rain four walkers bought an ice cream from a hopeful salesman parked in Errwood car park. You have to admire their determination to enjoy summer.

A long walk up to Windgather Rocks took us through Goyt Forest where large numbers of pine trees had either died of disease or blown over. Keith disappeared behind the fallen trees but two blasts on the whistle brought him back to safety. Happily the rain had stopped and it looked as though we might dry off as we walked along the ridge to the cars. Alas, another shower as heavy as any we had experienced on the walk ensured that we carried the water home with us.

John and Doreen assured us that the views were spectacular on the recce and the brief views we had when the mist parted gave a hint of what we might have seen on a clear day.

Nobody was brave enough to take pictures in the prevailing conditions.

The cars finally settled in the same lay-by under Hen Cloud but before our group of 13 climbed the hill, we met a couple who told us about the peregrine falcons that had recently raised three chicks in a nest on one of the cliffs. We reached the top and looked down on the birds flying below where we called upon Dave Millington – ace bird-watcher – to identify the falcons. He confirmed that none of them was a wallaby and we lost interest then. Near the top of the Roaches we met a small herd of cows pretending to be in an alpine meadow. They looked quite out of place and must have risked life and limb to cross the rocky surface to reach their chosen pasture.

The warm sunshine had promoted the widespread adoption of shorts and splendid views were available in all directions. To the north we saw a distant red helicopter and several police cars by the road as traffic backed up both ways. We assumed it was the air ambulance attending a road traffic collision but it flew off and we were none the wiser about what had happened. (The Midlands Air Ambulance website carried no details of this mysterious incident!)

The walk took us in a figure of eight round the Roaches and Lud’s Church with an ice cream van parked at the crossover point. Careful monitoring revealed that walkers who had an ice cream the first time round did not indulge the second time. Congratulations on your discipline!

The site for lunch provided a set of mossy hillocks for relaxing as we took in the peaceful scene of pasture and trees towards Mow Cop and Bosley Cloud. After that we climbed over the top to visit Lud’s Church. (You can’t pass it without popping in.) As usual it was cold and damp but it did provide some mud to test our boots.

The route back to the cars went along the road which was mostly downhill, but it seemed a long time after seeing the cars that we arrived at the lay-by. Although the sky clouded over after lunch, the entire walk was completed without rain and Ralph was able to take the pictures displayed in the gallery below.