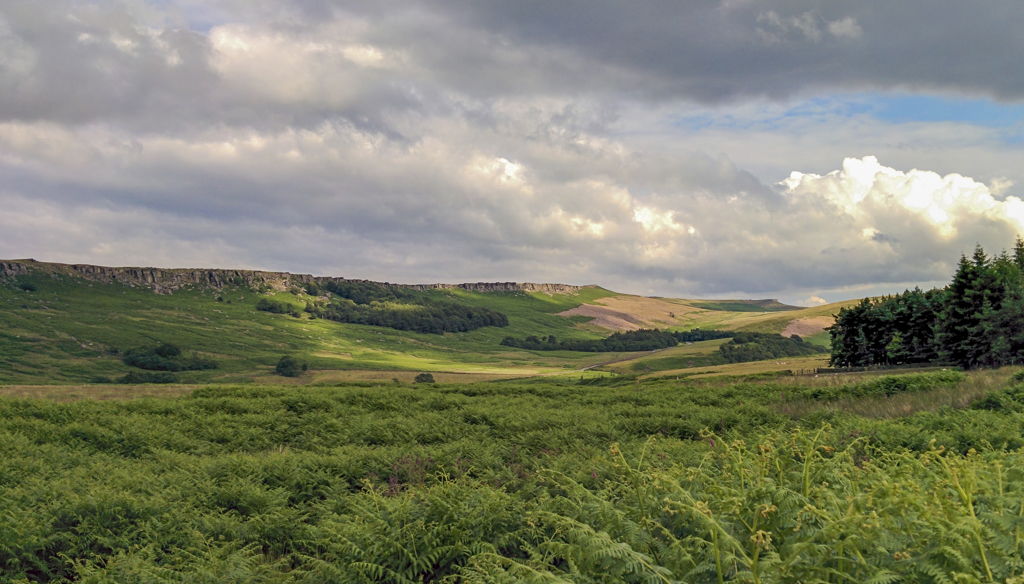 No report of this walk.

For the second of the July walks the group travelled to the outskirts of Hathersage, parking under the splendid panorama of Stanage Edge at Dennis Knoll. The weather conditions were very good – mostly cloudy with a few brief showers before the sun emerged as we left Stange Edge for the car park.

The route took them across Moscar Moor, passing some millstones en route that were left from the days when they were made up here, but never made it to their intended destination.

After coffee, in a well constructed shelter for the grouse shooting fraternity, we crossed High Lad Ridge to a small reservoir – with its attendant, now derelict, pumping station, formerly used by the Yorkshire Water Board.

The group then followed the leat which took water from this reservoir down to those at Rivelin – the next port of call (after a chat with a chap helping to build a new grouse shelter, who was bemoaning the lack of birds this year).

Crossing Head Stone Bank, the route took us along Wyming Brook Drive, an old carriageway probably used by the Sheffield gentry in former times. After a short detour to look at one of the Rivelin Dams, the party then entered the Wyming Brook SSSI and made the ascent of this beautiful brook with its spectacular array of waterfalls, and varied flora and fauna.

On emerging from the valley we climbed past the three Redmiles reservoirs with ample opportunity to enjoy more excellent views over the border country – before finding ourselves, again, on the Long Causeway – allegedly an old Roman Road running from Templeborough to Brough. This should have taken us up to Stanage Pole, an ancient marker of the boundary between Yorkshire and Derbyshire dating back to the 16th century. Except that it didn’t – because the pole had been nicked! However evidence of its provenance was still to be seen in the rocks, with the initials of Parish road surveyors carved in to the gritstone.

As the walk continued along the Edge, the evening sun emerged and, following the descent down to the car park, revealed the full length of the escarpment in all its majestic glory.

The Long Walk Group drove to Loggerheads Country Park in the heart of the Clwydian Hills. Some of those present suspected that missing members might have conveniently remembered reasons to stay at home to avoid a repeat of the heavy showers that had occurred the previous day and, indeed, on the morning of the walk.

The group doesn’t visit Wales very often and while the spelling and pronunciation of the place names baffle the English visitor, the views from the top of their mountains can be breathtaking. This was to be our experience.

Cheerfully leaving the car park – a bit late as the leader had failed to negotiate a revised route around Winsford – in very light rain, we passed a pleasant morning perambulating the paths under Pen y Bryn, along the Afon Alyn to the village of Llanferres. Here Ralph offered the weak-willed the chance of a drink and a bite in the pub, before they could catch a bus back to the car park. Although there was no evidence that the pub was actually open, nobody took up the offer because it had stopped raining and they wanted to climb the promised big mountains.

Their wish was soon fulfilled, as a steep ascent out of the village was followed by a short flattish stretch – perhaps highlighted by watching the behaviour of group of young wrens testing their wings out of an obvious nest in a tree trunk.

Then the climb began in earnest as we reached the Offa’s Dyke Path to ascend and then descend to Bwlch Crug-Glâs. There followed a climb to the summit of Foel Fenlli and the effort was rewarded with magnificent views down the length of the Vale of Clwyd, from the Mersey Estuary in the north, to the Malverns and Wrekin to the south.

Having then descended to Bwlch Penbarra, for the lunch break, we could see the Jubilee Tower, atop Moel Famau, as our next objective. The popularity of this route could clearly be established by the number of well-worn paths leading to the summit – despite its height of 1817 feet (554 metres to those under 70!).

The Jubilee Tower, erected to mark 50 years of George III’s reign, was an interesting diversion and afforded the chance to identify, through 4 or 5 topographs, the available landmarks  –  from Mow Cop to Snowdon, from Prestatyn to Cadair Idris. Wonderful!

The descent took us down through what is a rapidly declining Clwyd Forest to circumnavigate Ffrith Mountain. On the way we passed a smallholding which featured a large sow next to the road. Ralph stopped to photograph the animal whereupon some bright spark suggested that our normally intrepid back marker should ride it round its paddock. The back marker considered the upside – being pictured on the website riding a pig – and the downside – falling from a pig into the mud and having his face bitten off – and declined.

A pleasant amble down to the river and a stroll along the banks of the Afon Alyn again, led us in the sunshine past the Devil’s Gorge (remaining from the mining for lead, zinc and limestone) back to the visitor centre. On arrival Ralph once again demonstrated his leadership skills by buying two ice creams just as the staff were trying to close the shop.