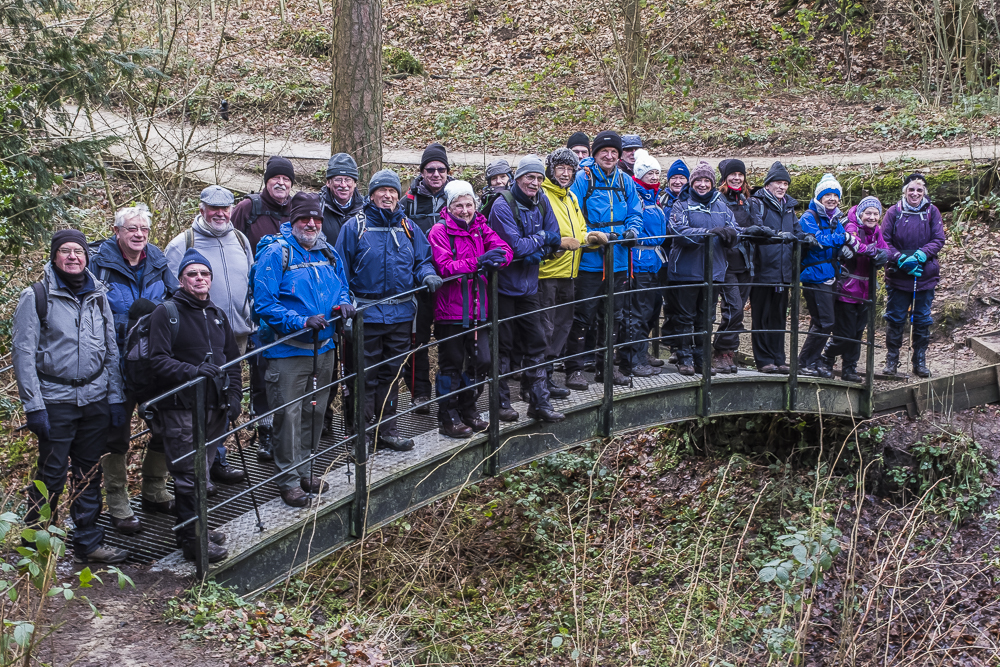 Members of the Long Walking group decided to reward themselves for the effort they have expended in the last year to combat mud, steep slopes, stiles, barbed wire, stony footpaths, farm animals, wind, rain, fog, prickly hedges, dog bites and cake shortages. They chose that temple of culinary restraint – The Legs of Man – for their post-Christmas meal. They all dressed up so nicely that the usual reserve on walks was dropped, resulting in an outbreak of festive handshakes and kissing. This familiarity combined with the excellent food to make the members want to go out in 2018 to combat the hazards listed above all over again.

Ralph was on hand to propose a vote of thanks to Kath and Elaine for organising the lunch in the face of reluctant cooperation from the members. He took some pictures to keep his hand in before the walks start again and, had there been a competition for best tie, would have been a contender for the top slot. He did miss a prize shot by failing to include a picture of the sweet trolley. Weight watchers beware!

17 Jan 2018 Styal Walk Leaders: Kath & Elaine, Length of walk: 8 miles , Driving Distance: 19 miles, Number walking: 25
Starting from the Styal Mill car park the party wandered through Styal woods where older members of the group marvelled at how the paths had been altered to improve access. The rocky outcrop of Giants Castle provided the site of the first of three bridge pictures during the walk.

We passed the Airport Inn and crossed the Altrincham Road to reach Burleyhurst Wood, which led on to Ross Mere. This is a recycled sand quarry, now used by anglers but it is either too new or too insignificant to justify its name appearing on the Ordnance Survey map. In spite of that it offered a suitable site for lunch which was only partially blighted by a sharp hail shower.

The walk continued to Lindow Common passing Lindow Moss where the body of a young man from the Iron Age (55BC) was found in 1984. The year before that the head of a woman had been found which prompted a Wilmslow resident, whose house backed on to the Moss, to confess to killing his wife and dumping her in there. The guilt obviously got to him because the head was assessed as being 1500 years old.

After circling Black Lake on the common, we crossed a sports ground and went down to the River Bollin. At this point in Wilmslow there is an area of greenery where the well-heeled local dogs take their exercise. Our party exercised their way back to the National Trust car park along the River Bollin.

Kath and Elaine first walked this route last November when the autumn colours were on display and liked it so much that they thought it would be good for a spring walk embellished by flowers. Since it was brought forward to fill a gap in the schedule, there were few flowers visible in the mud. Nonetheless the walkers enjoyed it and will no doubt look forward to its return in the schedule.

In spite of the party reaching the critical number of 25, there were no reports of people going missing or calls for recounts. These things can be so stressful.

Having used the walks he downloaded from the Madeley Centre website for his last four annual birthday walks, the leader had to either a) work out his own route, or b) choose the walk that enjoyed 52 stiles. Ralph was relieved to find that this walk involved crossing only 8 stiles. I still have the route describing the 52 stile walk for those who missed it.

The weather forecast said that the day would start with strong winds and the howling noise and rain crashing against the windows at 5am confirmed this was so. Nonetheless 20 walkers arrived at Madeley for their battle with the elements. It has to be said that by the time we started out the wind had died down and the rain was little more than a distraction.

We left Madeley to the north taking in the last two of the stiles in the famous 52. Under the hill on which stands the remains of Heighley Castle, Ralph took a  bridge picture in spite of the low light level under the dark clouds.

Heighley Castle is a Grade II listed building which was constructed in the first quarter of the 13th century by Henry de Audley and was destroyed by the Parliamentarians in 1644. In the time its walls stood on the hill, the Audley family used it as one of their residences; they had others in Audley, Nantwich and Buglawton. It was used as a prison in 1534 and nothing else is recorded about it. The Parliamentarians destroyed it to stop the Royalists having it; it seems to have been a seriously unloved structure.

The wall towers were clearly visible until the mid- 20th century and are known to measure approximately 6.5m square. It was probably listed to prevent it disappearing altogether.

The coffee (and cake) stop took advantage of a hill offering views to Fiddler’s Ferry power station, Beeston Castle and Winter Hill. Under the influence of lemon drizzle cake, Tom claimed he could see the Anglican cathedral in Liverpool; Lesley took him in hand.

Trekking down the hill we went under the M6 and climbed up Red Hall Lane to Halmer End. This was the site of the Minnie pit, named after Minnie Craig, the daughter of the colliery owner. On 12 January 1918, an explosion and fire killed 155 men and boys down the Minnie pit; this was the worst mining accident in the North Staffordshire coalfield. The leader of the rescue team died next day as his breathing apparatus malfunctioned and the work to recover the bodies of the casualties went on until August 1919. We examined the memorials at the pithead and by the Methodist chapel before taking lunch on the benches and picnic tables overlooking a nature reserve built out of a flooded opencast coal mine.

Ralph entertained us as he tried to make friends with the birds on the lake until we set off for the return leg though a forest of silver birch trees covering the remains of coal mining. Slag heaps might be preferable!

Emerging from the so-called trees, we arrived at the pathetic remains of Leycett ‘the clearing in the woods’. Leycett was a small mining village, built in the late eighteen sixties to accommodate the miners and their families. Mining in Leycett was first mentioned back in Roman times but ended when the colliery closed down in 1957. We saw the remains of the railway cutting, since used as a landfill site and one or two houses. We didn’t see, because they have been demolished, the station, shops, church, miners’ institute, school, doctor’s surgery and the recreation ground. Worst of all we missed the terraced houses in the romantically named Top Street, Middle Street and Bottom Street; all gone!

Continuing our slog through the muddy tracks we arrived at Finney Green. This was the site of the Hollywood Music Festival held in May 1970 that attracted 45,000 people over the weekend. It was notable for the first performance of Grateful Dead in the UK and also for the performance of Mungo Jerry, and featured such notable bands as Free, Ginger Baker’s Air Force, Colosseum, Family, Black Sabbath and Traffic. The company responsible for the festival promptly went bankrupt unable to pay festival staff. This was the first rock concert to be held in the northern part of Britain and should have been aired on television. The story goes that the film crew were spiked with LSD by one of the bands and so the footage was never shown.

Down the hill from the festival site we passed a large house that boasted a simple swing by the path. One of our simple walkers had a go on it as usual and this was duly recorded for posterity.

As we skirted Keele following the track to Honeywall Farm, a small herd of horses pranced about on the top of a hill to attract photographers or more likely to distract them from the state of the farm. Generations of abandoned vehicles and machinery littered the fields waiting for future archaeologists. The sooner we bring back the Staffordshire Tidy Farm competition the better.

We stopped for a drink before the final hill and then strode down to the M6 for the much-delayed bridge picture. Ignoring the helpful suggestions, Ralph kept off the centre reservation and took his shot with us on the bridge. The few sunny periods that had occurred were over by now and we walked the last twenty minutes in a rain shower which stopped at the Madeley Centre.