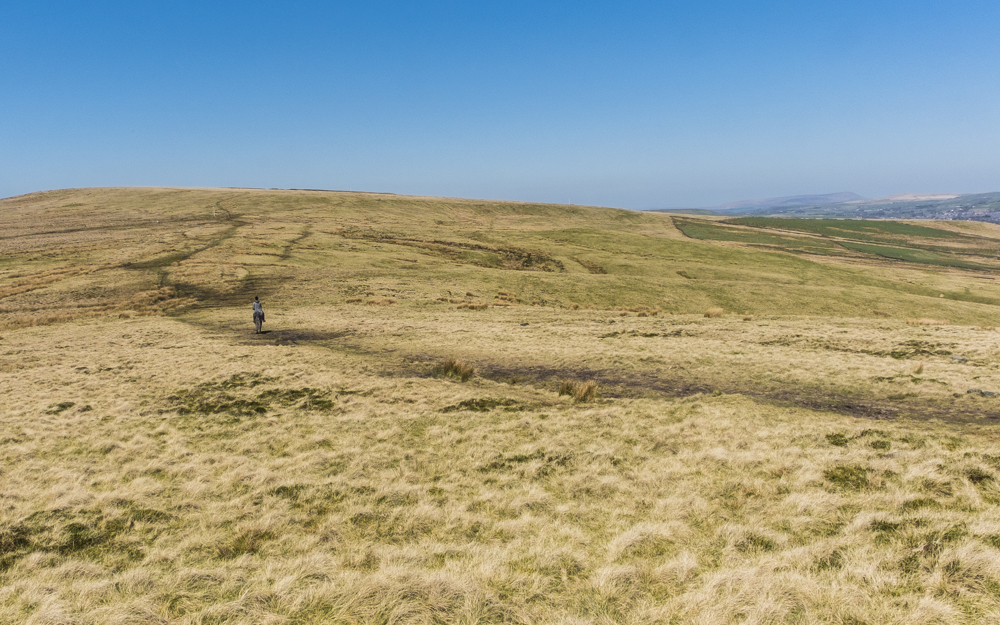 It was one of those days when you deploy your overtrousers and rucksack cover from the start. Ralph assured the group that the mud wasn’t too bad on the recce but the previous night had been rainy so we should be prepared for worse. He was right; water was streaming over the tarmac road as we made our way to Gradbach Hill and once in the boggy ground we became quite expert at finding tufts to support us until we moved to the next one.
The occasional tarmac section was a blessed relief but we had to dive into bogs from time to time. On one of the off-road sections we stopped for coffee in an abandoned farm; here Ralph put on his judging hat for the Staffordshire Tidy Farm competition but the site didn’t make the grade. In fact, nobody can ever remember finding a tidy farm in Staffordshire, but Ralph lives in hope.
We marched up to Flash in one of the occasional outbreaks of sunshine but once we ventured off-road the rain and hail returned. Flash claims to be the highest village in Great Britain and also the source of the term “flash money” (meaning counterfeit). This is probably true because the phrase is unknown anywhere else. The Chambers Dictionary has two meanings of the word “flash”; the lesser known version is “pool, pond or marshy place”. Exactly!
For lunch we hid from the wind behind some prominent rocks on Wolf Edge and then went downhill to the Dane Valley Way. We followed this path back to Gradbach risking life and limb in the abandoned coal mines and quarries of Axe Edge Moor. The soggy conditions caused Ralph to worry about crossing the River Dane on the stepping stones but everyone made it safely and then stopped for a drink at Three Shire Head (or Heads). There are so many flat stones around the Grade II listed packhorse bridge that it would be criminal not to sit on them.
For a while we thought we might complete the route in sunshine but we soon saw the hailstones dropping from the distant clouds and we were in it again. We did see, when the sun came out, what a beautiful area it is and we shall no doubt return.

A sunny day with little wind saw us start the walk in Nuttall Park by the river Irwell in Ramsbottom. The last time we visited the town we headed for the wind farm on the top of Scout Moor so obviously we had to seek out an alternative high point and we saw it as we set off.

The route took us through wooded valleys so that we couldn’t see how high we had to climb but eventually we emerged from the trees and stopped for a drink with views over to Manchester. Several people in Manchester rang the local radio station to report a bright light on Holcombe Hill; Christine was wearing a fleece from Aldi in a very fetching shade of pink. Refreshed by the drink and the rest we strode out for our target – the monument to Robert Peel on Holcombe Hill 1100 feet above sea level.

Peel was actually born in Bury and there seems to have been some rivalry between the Bury folk, who put up a statue, and those at Ramsbottom who rushed to build the tower. They raised the £1,000 cost of the tower and dug the stone out of Holcombe Hill. The Peel Tower was opened in September 1852, the day after the inauguration of the statue in Bury, but large numbers who had travelled by excursion train from Salford arrived too late to witness the ceremony. Further difficulties arose because in their haste to erect the tower they forgot to ask the Duke of Buccleuch if they could build it on his land. This matter was eventually rectified in 1868 when the land was transferred into the keeping of six trustees, on the condition that it would not be used for contentious public meetings.

We walked across Holcombe Moor looking for more hills to climb and eventually stopped for lunch on Harcles Hill with a view over to Bull Hill. The path ran through the middle of our party as we ate and various animals were driven through in case they wanted to bite or trample us. No injuries were recorded.

From our vantage point we could see the edge of the Holcombe Rifle Range danger area and spotted a memorial stone with a wreath attached. Various theories were advanced to explain this stone – all completely wrong. It didn’t mark the site of a plane crash and was not dedicated to soldiers killed in training. It actually marked the site of a pilgrim’s cross that was vandalised in 1901. This prompted Ralph to invent a story about Peter the Hermit passing this way after instigating the First Crusade. There is no evidence that he visited Lancashire on his way from Cologne in Germany to Jerusalem.

In 1942 there was a tragic incident at Holcombe Rifle Range when a sergeant in the Home Guard was demonstrating an anti-tank shell to some colleagues. He removed a wire from it and then said ‘This thing is quite safe. It would need a hard impact to make it go off’. Then he hit the table with it. In the resulting explosion the sergeant and four other Home Guard soldiers were killed. The table was also damaged.

Holcombe also suffered in the first world war; in September 1916, Holcombe was bombed by a Zeppelin of the Imperial German Navy, which dropped five bombs on the village on its way to Bolton. Some buildings were damaged but nobody was killed or injured.

From Holcombe Moor we made our way through the National Trust estate of Stubbins. This is an Old English name meaning ‘a place with tree stumps’ and we struggled to negotiate the exposed tree roots on the way down. We eventually reached the river Irwell again and followed the path alongside the bank back to Nuttall Park. As we followed the river we were constantly reminded of the damage that the floods of Christmas 2015 had caused. The path had washed away in many places, the stones confining the river were scattered over surrounding fields and litter was still caught in the branches above our heads.

The Daily Telegraph stated that April 2016 is contending to be the coldest April since records began but we drove to the start of the walk in sunshine. The station at Cheddleton houses the headquarters of the Churnet Valley Railway and provides a handy parking place.

Those familiar with the Churnet valley will remember the railway track, Cauldon canal and river crammed into the valley bottom but this walk is not just about transport; there is a large element of food involved – particularly involving animals. Across the road from the station is a small field containing mummy pigs and piglets. The animals gamely dug into the mud for roots and other goodies but there was no sign of anything growing. The pigs were free range but they had killed anything green in the field.

We set off down the canal, which eventually joined the river, but it is difficult to tell them apart unless you stand at the connecting locks. The difference that we observed was the lack of dead sheep in the canal.

We followed the waterways past a massive stone-built lime kiln to Consall station where we turned away from the valley bottom into Consall Wood. At this point we started to undulate in a way reminiscent of the Loch Ness monster’s humps; up to the top and then down again and again. People started to mark tree trunks, convinced that we were going round in circles through a forest of rotten birch trees. Eventually we climbed out of the valley and made for the village of Consall and stopped for lunch. Mike made himself comfortable on a stone wall and reached into his rucksack for the plastic box containing his sandwiches. He opened it to reveal two uncooked pork chops, which he was expecting for his evening meal. There is a lesson here; always look inside the box! He took this crisis bravely and ate a chocolate-only lunch. To take his mind off the food shortage, the rain started.

The road to Wetley Rocks took us past a field containing two donkeys who lined up and posed for Ralph like professional models. This made him keen to capture another great shot and he found it on the edge of Wetley Rocks. Rock House is built in a former quarry and the owners have put a huge amount of effort into clearing it and laying out a garden in it. Ralph’s idea was to stand at the entrance and photograph the slope above the drive; the owner’s idea was to take Ralph right to the top of the garden and show him the lovely views down the valley. The owner prevailed and the rest of our party sat on a wall to await his return.

After walking down the hill into the village centre we promptly climbed out again on a path that led through a tunnel under a house on the crest of the hill. It wasn’t the obvious route but our leader had done a proper recce and took us through it. Unfortunately we never discovered why three wooden crosses stand on the highest rocks overlooking the village.

We emerged on the far side of the tunnel with a glorious view of Cheddleton’s largest structure – the Pointons factory. This massive site takes in animal and food waste and turns it into pet food and products for pharmaceuticals. Their website also offers a useful service to bear in mind; if you have buried on your land some animals that were killed to prevent the spread of foot and mouth disease and you want to use that area for something else, give them a call. They will excavate the putrefying corpses and take them away. The website doesn’t reveal what they do with the remains

It was while we approached the Pointons site that the snow hit us. The weather was quite mixed with doses of sun rain and snow but never extreme.

When we saw Cheddleton station from the top of the hill by Pointons we expected to be back in the cars in short order but seeing the destination and reaching it are very different things. Even a gentle downhill stroll to a destination you can clearly see takes longer than you expect. We must learn not to be impatient.