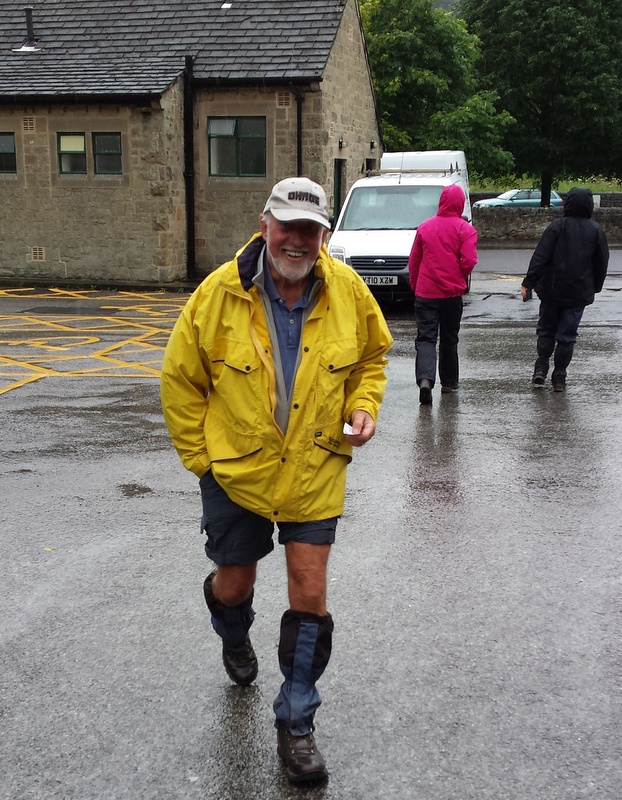 The walk started outside the church in Earl Sterndale. This building has the distinction of being the only church in Derbyshire that was bombed in world war 2. It was a mistake (the bombing and the war). We set off past the village pub – The Quiet Woman – on our way to the valley of the river Dove. On the way down we saw Park House Hill and Chrome Hill. These are remnants of a coral reef that was built in the Carboniferous period when Derbyshire was in the tropics. We passed Park House Hill to get to Chrome Hill where nine of the party volunteered to climb over it while the others took the road on the long way round.

The climb to the summit was steep but straightforward and rewarded us with views of the Dove valley and the surrounding hills. The walk across the top and down the other side was extremely windy and we were relieved to come down safely. On our way up another hill to meet the road walkers for a refreshment stop, we met a party from Alsager U3A, which included an old friend of John Minshull. Not having seen this chap for 30 years John was pleased to be able to remember his name.

We stopped for lunch on the side of Hollins Hill from where we could see Park House Hill and Chrome Hill in the sunshine. Our next stop was Hollinsclough but the village seemed deserted and we set off up the very long hill that led us to the valley of the river Manifold. After a short walk over the river and along the road we took to the fields again to aim for the village of Longnor where we took advantage of the cakes and ice cream and sat in the sun for an afternoon tea stop.

The final leg took us back into the Dove valley and up the other side between Hitter Hill and the wireless mast. At this point the leader could honestly say that it was downhill from here.

The chickens that hang round between the church and the Quiet Woman took a deep interest in the bits of mud and other material that people knocked off their boots for them. It all goes into the eggs.

The walk through Cumberland Clough is an annual event in memory of Janet Thompson, who was Ralph’s glamourous assistant and generally enlivened the walks until she was killed.

This year we climbed Cumberland Clough and stopped part way up so that Ralph could take his floral tribute to the designated spot off the path. While he was away, the rest of us made merry with our refreshments. Then a local bird made itself known so that the birders in the party could argue about its identity. They eventually agreed it must be a Stonechat. We have a picture taken at the scene.

As we neared the Cat & Fiddle pub (still closed) we met a cloud of midges and this put us off eating on the picnic tables around the pub. Instead we went to the hill overlooking the Peak View café and ate our lunch there. Regular walkers will remember that Susie’s cousin runs this place and it would have been very nice if Susie could have tottered down and brought us a collection of refreshing ice creams to counter the heat and humidity. Sadly the relationship between Susie and her cousin is little more than Christmas card swapping so we carried on unrefreshed.

We took the path to the Bottom of the Oven where we met a local character who wanted us to visit Forest Chapel and gave us lots of reasons to go. Another reason was that it was on our route back to the car park. We scattered around the church and churchyard to consume our remaining food and drink. There was a hope that there might be an outside tap that we could use to refill our water bottles. There isn’t; none of the graves looks as if anyone comes to plant flowers so a tap is unnecessary. However, there was a rain shower which showed good intentions even if it was useless for drinking. The shower forced the outside party to scuttle into the church but it didn’t last long and they bravely emerged again.

As we took the path down into Wildboarclough, we could see Crag Hall across the valley. This is the country seat of Lord Derby but we didn’t see anyone who looked aristocratic – not even in our party. Neither could we talk about Lord Derby because Ralph banned any talk that might be construed as political. Maybe next week we will be able to talk about the Duke of Devonshire as we visit Chatsworth.

For various reasons many members of the group had announced their absence before the day of the walk and they were probably grateful when they saw the weather forecast. It promised rain all day and that is exactly what we had. Not heavy and not driven by a violent wind; just persistent. Sometimes the cloud became brighter and sometimes the rain almost disappeared but it was our constant companion. We were short of companions because only one car left Waitrose car park after the five who turned up voted to tough it out. Bill and Ruth joined us at Baslow, where they had parked their caravan. Graham wore his usual shorts but added gaiters to keep the rain out of his boots. After we climbed out of Baslow he decided to add overtrousers to reduce the draught on his knees.

Our coffee stop was by the monument to the Duke of Wellington, which affords not a bit of shelter from rain. By this time we were used to being constantly wet but we never got to like it.

The next talking point was the Nelson monument on Birchen Edge. This has the appearance of a project put together by an amateur enthusiast on a limited budget. The column (erected before the BIG Nelson’s Column in Trafalgar Square) is slighly bigger than a man and appears to be the column of a farm porch that was surplus to requirements. It has a ball on top the size of a cannonball. There are three rocks near the site chosen for the monument. The project manager carved on them the names of three of the ships at the battle of Trafalgar. And that’s it! Was it ironic; we shall never know.

We passed the Robin Hood pub without feeling that we should pop in for a break. We then had to fight our way through some very damp, jungly paths to reach our lunch station at the hunting lodge overlooking Chatsworth. This gave us a welcome break and there were hardly any flies to bother us.

When we reached the valley of the river Derwent for the last leg of the walk, we realised that what this area needs is more dung beetles. The cows above Baslow and the sheep in Chatsworth had exercised their bowels enthusiastically on the paths and it took some effort to avoid collecting fragrant deposits on our boot soles.

The secret seven became the famous five when we left Bill and Ruth by their caravan park and made our way back to the car. On the return journey we rejoiced in the air conditioning which prevented the damp bodies from steaming the windows like in the olden days.