Once again the January walk set off from the delightful Madeley Centre with its tarmac car park, warm toilets and coffee shop. Well-known residents of Madeley include Gordon Banks (England goalkeeper) and Lemmy (deceased member of Motorhead).

Just before we crossed the main West Coast railway we passed on the left All Saints Church, which was founded in the 12th century. The building on the right with the upturned pyramids on its chimney stacks is the primary school in Izaak Walton Road named for Sir John Offley (c.1584-1647) who left endowments in his will for two schoolhouses, one for boys and one for girls. Sir John had a son John who was a friend of Izaak Walton, who famously wrote “The Compleat Angler” (before spelling was invented) and lived for a time between Stone and Stafford. This John had a son, also John,  who married Anne Crewe of Crewe Hall and their estates merged.

As we left the village we turned up a muddy track, known for no obvious reason as Red Lane, and followed it until we reached the outskirts of Onneley in Shropshire. There we turned onto Station Road. There is no sign of a railway station now but the North Staffordshire Railway used to run just to the south from Stoke to Market Drayton.

We celebrated the New Year with Lemon Drizzle cake at the coffee stop, which fortified us for the challenge of climbing through a hedge to reach the first stile of the walk. This involved two walkers standing side by side while the others climbed through holding on to their walking poles. After a few more stiles the walk had to divert onto the road because the recce revealed that a stile we had to cross was in the centre of a lake too deep to wade in boots.

From the main road we walked the route that became the drive to Phynsons Hayes Farm. Although the OS map gives it it that name, there is no sign of farming and it looks more like a mansion with its surrounding park. Google searches reveal that it was valued in 2007 at £3 million and has 7 bedrooms, 5 bathrooms and 3 reception rooms. The recce confirmed that it also has at least 4 dogs, one of which bit one of the recce team (watch out for the golden retriever). On the walk proper there was no sign of the dogs, the owner having received advice from West Mercia police.

After the mansion we left the smooth tarmac of the drive and rediscovered the joys of walking through mud and puddles until we reached the abandoned Checkley Wood Farm. The barn provided a haven for lunch that was unnecessary given the continuing sunshine and we continued the Cheshire section of the walk until we crossed back into Staffordshire over the river Lea. There followed a section with five stiles in a very short distance that could be bypassed by brushing against the adjoining barbed wire fence. We then dived into Wrinehill Wood and climbed up to Wood Farm where the footpath crossed the farmyard. A gate divided the yard and kept two horses in one side from a few more in the other. Something had excited the horses and they were bouncing up and down as we approached; one jumped over the fence into the field. As we crossed this hotbed of equine activity, one of the horses decided to walk through the gate with us; we didn’t argue as it barged us out of the way. We then climbed the final hill where the leader could announce that “it’s all down hill from now”. 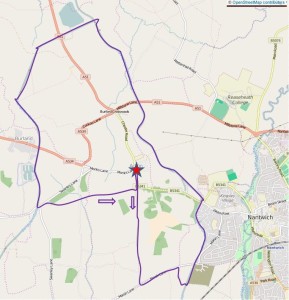 You may use the above route to follow the walk from the star (starting point) with an OS map. Click here to see details of the OpenStreetMap licence

A car park conveniently sits opposite Acton Church at the start of the walk and a toilet in the churchyard was also available. Acton churchyard holds the grave of A. N. Hornby, who was one of the best known sportsmen in England during the nineteenth century excelling in both rugby and cricket. He was the first of only two men to captain the country at both rugby and cricket. He also captained the England cricket team which lost the Test match that gave rise to the Ashes, at home against the Australians in 1882. As if that wasn’t enough, he played football for Blackburn Rovers.

Guides in the church offered to explain its history and the links with the great families of Dorfold Hall so, with our physical and spiritual needs satisfied, we set off. Once we had some mud on our boots, the rain started and on went the waterproof trousers. Shortly afterwards the rain stopped and didn’t bother us again; off with the waterproofs and pack them away for cleaning later.
The went past the back of Dorfold Hall on a muddy track, where we avoided a couple of giant tractors. By way of a change we surged along a smooth tarmac road to reach the Shropshire Union Canal at a point where the new estates of Nantwich are marching towards Shropshire.
We unexpectedly met fellow walkers, Rod Daniels and Brian Weld on the towpath. They were busy on a recce so we let them go and made our way to Nantwich Marina for some fun with an animal that didn’t bite or barge anybody (see gallery of pictures).
As we strode alongside the canal, we were entertained by the remarkable variety of the names given to the many narrowboats moored in the area. We followed the canal to Hurleston where we turned onto the Llangollen branch and stopped for lunch at the locks where we had proper seats for a welcome change. A lone boatman was thoroughly exercised as he took his craft up the locks and was, no doubt, pleased that we refrained from giving helpful advice as he struggled. We did close a couple of lock gates for him as we left but he didn’t give us a lift when he passed us later.
We left the canal at Swanley and found some more muddy fields to cross leading to the curiously named Madam’s Farm. After that we had just one more soggy section before we returned to Acton.